There’s been a shift in recent decades to increasingly delayed marriage. In 1960, the median age for a first marriage for men was 23. For women it was 20. In 2012, the numbers had raised to 28 for men and 26 for women.

There are undoubtedly some pretty significant cultural factors at work. Statistically, you could probably map cultural acceptance of premarital sex and cohabitation on a similar trend line to the age of first marriages.

Regardless of the reasons for this delay, it’s been a source of extreme frustration for many single, godly young men and women, especially of the I Kissed Dating Goodbye generation, who were taught not to pursue a relationship unless they were sure of the outcome. It’s all too easy to let the bitterness creep in as these men and women watch seemingly everyone around them marry and start families. This especially seems true for women who were raised in the church and who were raised to let the man do the pursuing. 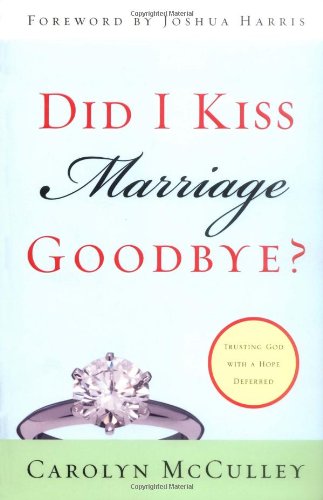 Carolyn McCulley’s Did I Kiss Marriage Goodbye?  is written primarily with these young women in mind. Unlike many books written for single women, which seem to focus on dating God’s way, McCulley focuses more on finding contentment as a single person, regardless of whether or not Mr. Right ever shows up on the scene. McCulley interweaves her own story of prolonged singleness, as well of those of her friends, with tons of Scripture about singleness, Godly femininity, and trusting God with your love life, even if it never happens.

Here are some key insights:

Singleness is both a gift and a state that can happen to anyone for any number of reasons. McCulley points out that while in the book of Ruth the”main” character gets all the focus, her mother-in -aw Naomi is also a single woman; both women were widows. Only one remarried.

Other people’s happiness should be cause for our joy, not bitterness. Showing up single to yet another wedding can be awkward and embarrassing, and can lead to jealousy, but as McCulley writes, “Jealousy is a poison that simmers from indwelling sin and corrodes our hearts from the inside out. Resignation is a begrudging existence, one based in not believing the best of God. Both operate out of a mind-set that God has finite resources–a God of scarcity and not abundance–as though if one person gets blessed, that diminishes our chances of being similarly blessed. That’s just not true! If my best friend gets married, it doesn’t mean the pool of blessings is now down by one” (p. 61).

As a single, you have extra time and resources. Leverage them. Rather than just paying this lip-service and saying “Go serve,” McCulley walks through Proverbs 31 and provides practical tips for getting involved in kids’ lives, and seeking out ways to extend compassion and serve. The tips she offers are ridiculously practical, like “help that struggling family with childcare” or “give that wheelchair-bound person a ride to church.”

If you’re lonely in a crowd, look around. As she writes, “I’m training myself that whenever I feel alone in a crowd, I should look around for someone else who may be feeling the same way–so that I may be used by God to extend grace and kindness instead of being consumed by my own feelings” (p. 211).

Did I Kiss Marriage Goodbye? is available at Amazon.com.

Got questions, comments, or suggestions for this blog? We’d love to hear them! Just e-mail us at [email protected].