God wants us to ask—and He wants to give accordingly (Matthew 7:7). [/intro]

With the ways in which the Church is being persecuted right now around the world, I am inclined to feel overwhelmed. I can swing from dismissive to fearful. What can I do? What difference can I make? And if I’m honest with my thoughts of doubt…does God really move because I ask Him? Do my prayers matter?

Two years ago I was made aware of an American Pastor who was asked to come back to Iran to build an orphanage. Wanting to help his people (being an Iranian by birth), Saeed agreed. As he was about to return home, Saeed was illegally detained and imprisoned for his faith in Jesus. He was told, “Deny Jesus and you can go right back to your family.” Saeed held fast to his faith and he continues to preach the gospel to his fellow inmates amidst daily beatings and death threats.

Jacob, his son, was 4 years old when his Dad was imprisoned. He has now missed his daughter Rebecca’s 6th, 7th, and 8th birthday.

As God drew his wife out of complete despair, Naghmeh took it upon herself to be a voice for her husband and the persecuted church. Last September marked the first full year Saeed was in the notorious Evin prison. Prayer vigils were to be held around the U.S. (and eventually in several other countries) to peacefully implore our government to do their part, and most importantly, to give us an opportunity to come together as the Body of Christ for our suffering brother and the persecuted church.

It was difficult for me to think about coming alongside this one man. “But Lord,” I would ask, “there are so many! What difference can be made?” As I wrestled through this the Lord brought this scripture to mind:

I realized, in this moment, I could do for one what I wanted to do for many.

I watched for the vigil in Lansing, MI to be picked up by a “coordinator” so that I could go. The weeks were going by and no one had stepped up. Then it hit me—I need to step up. I see the need…I can fill it. I knew nothing about organizing a vigil, I had embarrassingly little knowledge of the inter-workings of our government, and I had no important title to speak of (though I think “Executive Mom” does have a nice ring to it). Then again, the Lord reminded me: 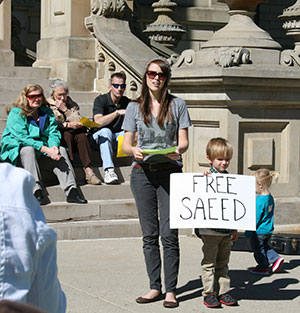 With the help of the Lord, the first vigil for Saeed in Lansing, MI became a reality. The very day of that vigil President Obama spoke with the President of Iran and brought up Saeed! This was a direct answer to prayer in which we greatly rejoice! There have been several other encouraging answers to prayer (including fellow prisoners coming to Christ and Naghmeh being able to share the gospel at the United Nations!). We praise God for continuing to work above and beyond what we even ask or think (Ephesians 3:20).

This month marks the second year that Saeed has suffered at the hands of his persecutors. The second year his children have not laid eyes on their Daddy or heard his voice. The second year his wife has played the role of a single mother as her husband bleeds internally from unattended injuries. So again we will be coming together on behalf of Saeed and the persecuted church.

Please join me, and thousands of others, in living out the commandment to “come alongside those in prison.” It can start with one. Though the circumstances are horrendous, I must thank God for this unique opportunity for us to come together as the Body of Christ (across different denominations and nations) and show the world what we truly believe: God hears our prayers.

So if there is any encouragement in Christ, any comfort from love, any participation in the Spirit, any affection and sympathy, complete my joy by being of the same mind, having the same love, being in full accord and of one mind. Do nothing from rivalry or conceit, but in humility count others more significant than yourselves. Let each of  you look not only to his own interests, but also to the interests of others. (Philippians 2:1-4)

Learn more about persecuted believers at The Voice of the Martyrs.