[intro]There’s no question that 2015 will stand out as a landmark year.

Between the Supreme Court decision to legalize gay marriage nationwide and the removal of the Confederate flag from in front of the South Carolina capitol building (and, more interestingly, from Walmart and the iTunes store), this year has been filled with controversy. Is racist speech protected by the Constitution? Is it legal for a bakery or a judge to refuse wedding-related services to a homosexual couple on the basis of firmly held moral convictions?*[/intro]

As these discussions pop up on Facebook, as a culture we seem to be reaching a general consensus: personal conviction may be okay among very close friends, but it has no place in public dialogue. If your beliefs would hurt someone’s feelings or contradict someone’s lifestyle, you probably shouldn’t even mention them, let alone act on them. 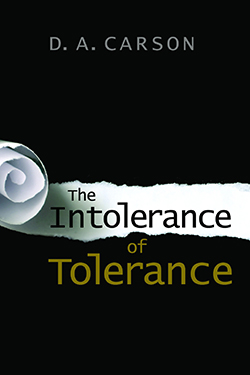 This is not a new trend. D.A. Carson, a research professor at Trinity Evangelical Divinity School, has been watching it for years, eventually publishing his 2012 book, The Intolerance of Tolerance.

Carson distinguishes between the historical tolerance—the acceptance of the existence of different views—and a new tolerance—accepting different views as true, “or at least as true as your own.” These two views of tolerance are, of course, incompatible. The old tolerance believes that through discourse, absolute truth might be found. The new tolerance believes there cannot be an absolute truth; the closest we can get to a moral absolute is the morality dictated by the people at large as forged by the government—a position often dictated, as Carson points out, by the loudest whiner. In short, the new tolerance cannot tolerate Christianity because we dare to follow a truth claim that Jesus is the only name by which we may be saved.

From this framework, Carson weaves through the cultural history of the changing definition of tolerance throughout the millenia and lays out the implications of the new tolerance for churches and parachurch organizations, as well as its likely continued impact on democratic government. The last chapter is particularly useful for Christians, laying out 10 suggestions for continuing to engage with a culture that will only continue to hate us.

The Intolerance of Tolerance is full of a number of gems and insights. Since not everyone will decide to read the book, and even fewer will finish, here are just a few of the quotes that struck me:

On the toleration of sin:

Yet Christians at their best have known how to put together revulsion of godlessness with transparent love for people who are enemies, not least because they follow a master who cried out in agony as he writhed on a cross, “Father, forgive them, for they do not know what they are doing” (Luke 23:34).

Genuine pluralism within the broader culture is facilitated when there is a strong Christian voice loyal to the scriptures—as well as strong Muslim voices, skeptical voices, Buddhist voices, atheistic voices, and so forth. Genuine pluralism within the broader culture is not fostered when in the name of tolerance none of the voices can say that any of the others is wrong, and when this stance is the only ultimate virtue.

Mutually exclusive beliefs, religious or otherwise, are not dangerous, provided there is also a commitment to ongoing discourse, to the older kind of tolerance.

On Christ-followers’ responsibilities to the truth:

Christians who attempt to be faithful to the Bible are bound to uphold certain truths—truths that remain true whether anyone believes them or not, truths that are bound up with the gospel, truths that cannot be sacrificed on the altar of the great goddess of relativism.

Once the category of evil disappears, our moral discernment has no structure.

On criticizing the government:

David Novak persuasively argues that only those whose vision of human rights is grounded in something other and greater than governmental decrees can ever have adequate ground for criticizing government when government becomes repressive. Otherwise the state easily becomes our master instead of our servant.

If the quotes above weren’t enough of an indication, The Intolerance of Tolerance is not an easy read. Carson is a professor, and it shows. It’s an important book, but it’s difficult. So if you haven’t bought a book since college and get most of your news from Facebook, you may want to mull on the points I pulled out in this blog post and keep them in mind when the next big controversy shows up.

If you’re willing to face a bit of a challenge, though, this book is definitely rewarding and thought-provoking. I especially recommend it for people attending or working for the nearby colleges, especially MSU. Universities, when done right, are built around the concept of public discourse and the free exchange of ideas; if nothing else, this book will remind you why it’s important to back your professor’s decision to teach, say, Huckleberry Finn  when other students complain about the portrayals of racist behavior.

If you choose to read this book, I highly recommend buying your own copy and writing in it. Take notes in the margins. Underline key quotes. Trust me, it will help you understand Carson’s points.

The Intolerance of Tolerance is available at the Info Center and on Amazon.com.

*I held up racism and faith-based beliefs next to each other because one, they’re the most recent examples in the news as of this writing and two, it is highly likely that in the future, Christians, Jews, and Muslims who take a moral stand against homosexuality will be harshly criticized as bigots. Christians in particular seem to be suffering the most already, perhaps because our dominant majority status places us in the position of “oppressor.” Please note that both I personally and Riv leadership as a whole distinguish between the hateful speech of those who oppress God-given diversity and the scriptural-based call to repentance for sinful behaviors, especially in regards to sexuality.